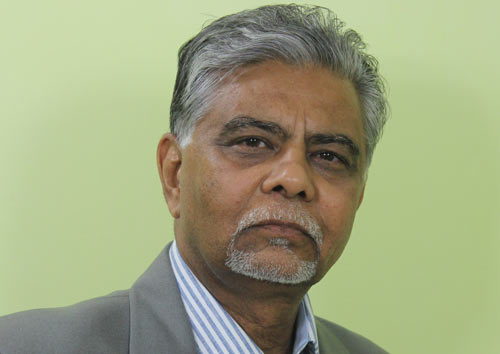 Qamar Waheed Naqvi is former News Director of TV Today Network and a formidable name in Hindi Television News Journalism. He coined the name Aaj Tak in 1995 and as Deputy to late S. P. Singh, a cult figure in Hindi journalism, he crafted an innovative style of vibrant, lucid, and viewer-friendly Hindi for Aaj Tak when it was launched as a 20 minute News Capsule on DD Metro in July 1995.

The copy style he developed for the Aaj Tak reshaped the manner in which Hindi News was to be disseminated on television. He is credited with unshackling the language, to make it appeal to the masses – in the Aaj Tak brand, the common man found his own context and voice, in a modern audiovisual idiom that he could understand.

What sets him apart is his constant itch to innovate and explore unchartered territories and he uses his extraordinary skills at language development, smart news communication, ideation, and presentation style to create an idea whose impact is telling in that moment and invariably becomes the trend for the future.

In his long journalistic career of 40 years, he worked with TV Today Network in two stints. The first, from 1995 to 2000, and then from 2004 to 2012 as its News Director, he led the Editorial teams of Aaj Tak, Headlines Today (now India Today news channel), Tez and Dilli Aaj Tak.

A tenacious team builder, motivator, and trusted leader, he is a professional with a 360° worldview of the industry, audience, emerging technologies, and content. A mentor who has spawned a generation of the young and dynamic breed of journalists many of whom are household names today.

He started his career in Print Journalism in 1980 as a Trainee Journalist (Hindi) at The Times of India Group, Mumbai, and went on to work for 15 years in Navbharat Times, Ravivar and Chauthi Duniya before shifting to TV journalism in 1995.